ON the back of two consecutive defeats in the Premier League, Manchester City host a Watford team in high spirits following a 3-2 win over Everton at the weekend.

Just a week after losing to Chelsea on home soil Pep Guardiola’s men were beaten again, this time by struggling title-holders Leicester City, as a Jamie Vardy hat-trick stunned City to lead the Foxes to a 4-2 victory at the King Power stadium.

Watford, on the other hand, came from behind at Vicarage Road to beat Everton in a performance which saw injury-hindered Stefano Okaka open his Hornet’s account with a brace following his move from Anderlecht in the summer.

With the Blues riddled by suspension – the likes of Fernandinho and talisman Sergio Aguero are still banned after picking up red cards against Chelsea – Watford will certainly fancy their chances at taking full advantage of a weakened City side.

The Hornets are not without problems of their own, however, with the likes of Robert Kenedy, Craig Cathcart, Brince Djadjedje, Younes Kaboul, and Adrian Mariappa all ruled out due to injury.

The upside for City is that Nicolas Otamendi will return to the side after serving a one-match suspension for picking up his fifth yellow card of the season, whilst 20-year-old striker Kelechi Iheanacho, who has 9 domestic goals to his name so far this season, is likely to replace the banned Aguero.

For newly-promoted Watford, Okaka is set to lead the attacking line again following his performance against Everton, and will likely be accompanied by in-form captain Troy Deeney. 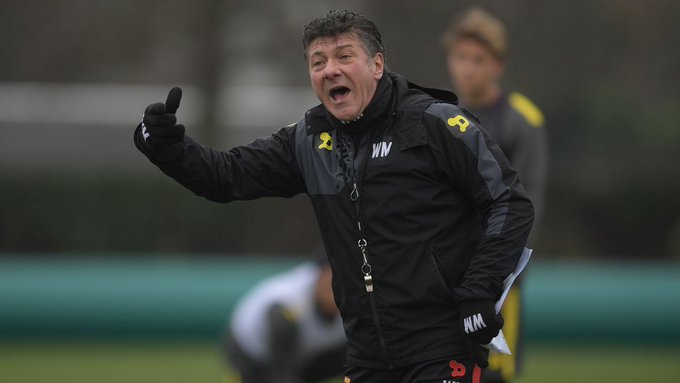 Walter Mazzarri says #watfordfc can compete with #MCFC as long as they are “100% ready” 👇 https://t.co/Nla9soONPg pic.twitter.com/3I6c5yaXVp

Despite their recent poor run of form, City have only lost three out of their 15 Premier League games so far this season, and in their past six meetings, the Blues have been victorious over the Hornets on four occasions, with the remaining two ending as a draw.

Speaking after their Leicester City defeat, Manchester City defender Bacary Sagna insists that the Blues will turn their form around starting from tomorrow evening.

Watford haven’t beaten City in their last nine meetings in all competitions, and have only won on six occasions in the history of this fixture, so they will be looking to add to this tally tomorrow night.